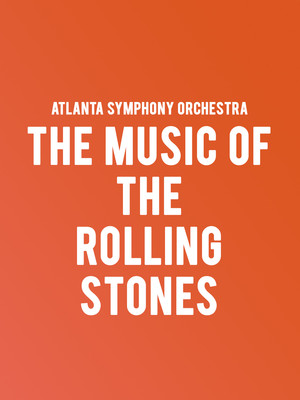 Atlanta Symphony Orchestra - The Music of the Rolling stones

"The music lends itself well to symphonic backing, and here conductor/arranger Brent Havens' work did not disappoint.

Why See Atlanta Symphony Orchestra - The Music of the Rolling stones?

In celebration of the 50th anniversary of two iconing Rolling Stones albums, Beggars Banquet and Let It Bleed, the Atlanta Symphony Orchestra team up with Windborne Music to bring their acclaimed production of The Music of the Rolling Stones: Mick Jagger and Keith Richards 1969 to Atlanta.

Under founder and conductor Brent Havens, Windborne have toured the world with a number of shows reimagining classic rock as orchestral symphonies, with productions dedicated to the music of Led Zeppelin, Pink Floyd, Queen, Whitney Houston and more. Expect a whirlwind ride through the Rolling Stones' iconic list of hits, with vocalist Brody Dolyniuk providing a stellar replication of Mick Jagger.