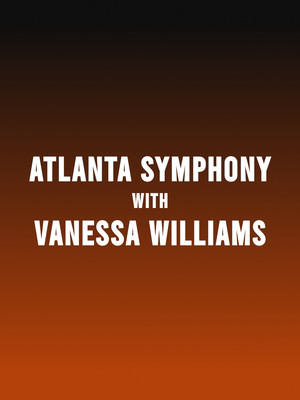 the persona she projected was a hard-working, self-possessed entertainer with a clear perspective on her show business lineage.

Singer and Actress Vanessa Williams performs with the Atlanta Symphony

The multi-faceted Vanessa Williams joins with the Atlanta Symphony Orchestra for a special performance celebrating the orchestra's 75th anniversary season. A true picture of pure talent, the 1984 Miss America winner has sold millions of records as a singer, received an Emmy Award nomination as a screen actress (Ugly Betty, Desperate Housewives, Soul Food) a Drama Desk and Tony Award for her work on Broadway (Into The Woods, Sondheim on Sondheim) and has also found success as a fashion designer.

As a singer Williams earned Grammy Nominations for albums such as "The Right Stuff" and "The Sweetest Days", as well as critical acclaim performing 'Colors Of The Wind' from Disney's Pocahontas. Atlanta Symphony is directed by Robert Spano, receiver of the 2016 American Composers Forum's Champion of New Music Award for his dedication to nurturing contemporary American music.