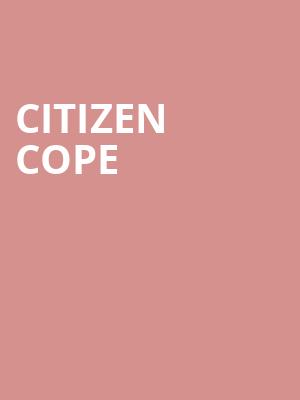 Citizen Cope hits the road on the Heroin and Helicopters tour

Citizen Cope has been pursuing his laid-back brand of hip-hop-inflected rock for over a decade now. He began his music career as a DJ for Washington rap collective Basehead, and his R 'n' B inclinations have stayed with him throughout his solo work, creating a beat-driven sound that was way ahead of its time.

His seminal record, The Clarence Greenwood Recordings, was released over a decade ago but still remains his most impressive achievement, a record that blends together reggae grooves, East Coast beats, and intimate lyricism into a complete whole. Among its highlights are "Son's Gonna Rise" which features Carlos Santana providing some sunny guitar lines, and "Bullet and a Target", which tackled gun violence and terrorism in its stream of consciousness verses.

Not sure what the previous post was all about. Show started about 10... more

Sound good to you? Share this page on social media and let your friends know about Citizen Cope at Buckhead Theatre.