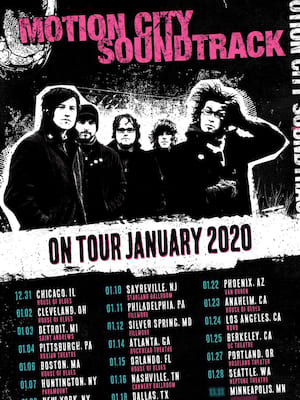 Don't miss MTC on their Don't Call It A Comeback tour!

Don't call it a comeback tour

After nineteen years in the business Motion City Soundtrack are hanging up their guitars...or that's what we thought! Almost four years since the band said 'So Long' to their fans the five-piece are back for a brand new tour for 2020. The 'Don't Call It A Comeback' tour (very funny lads) sees the group reunite as they hit 21 cities over the course of winter, kicking off with a special New Year's Eve performance in Chicago!

Forming 1997, Motion City Soundtrack broke into the charts with their 2005 release "Commit This To Memory" which landed in the number two spot in the US Indie charts! Over the next ten years, the group continuously toured and became a mainstay for the iconic Warped Tour. As well as their heavy touring schedule MTC released a further four albums through the mid-'00s, with their "Even If It Kills Me" (2007) and "My Dinosaur Life" (2010) reaching the top 20 in the US album charts! The group announced that they were disbanding after their 2015 album, "Panic Stations".

Don't miss your chance to see MTC live one more time! Who knows we may be lucky enough to hear some brand new music...

Sound good to you? Share this page on social media and let your friends know about Motion City Soundtrack at Buckhead Theatre.