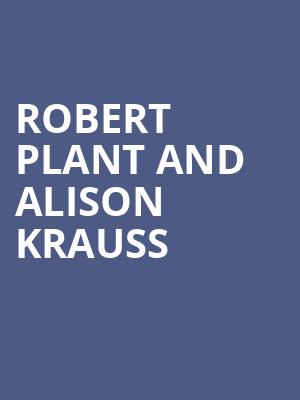 Photo by Oscar Keys on Unsplash

There's a palpable pleasure in hearing Plant and Krauss harmonize and trade lines. It often feels like they're delighted that they're making an album that lives up to their debut, and it's hard not to share their thrill

Live together for the first time in 12 years!

It's a musical match made in heaven, and fans will be overjoyed to know they'll finally be able to catch the iconic Robert Plant and Alison Krauss live on tour together after 12 years away from the road! Following the release of their newest record, November 2021's Raise The Roof, the duo will crisscross the country on the North American leg of this exciting outing.

Both hugely successful in their own careers, Robert Plant and Alison Krauss first collaborated on 2007's Raising Sand. Certified platinum and critically acclaimed, it represented a partnership that united fans of both artists. Follow-up Raise the Roof is likely to repeat that success, bolstered by performances from a who's who of rock and bluegrass, including T-Bone Burnett who also produced the album. Don't miss your chance to enjoy this rare paring live at a venue near you this summer!

Seen Robert Plant and Alison Krauss? Loved it? Hated it?

Sound good to you? Share this page on social media and let your friends know about Robert Plant and Alison Krauss at Chastain Park Amphitheatre.