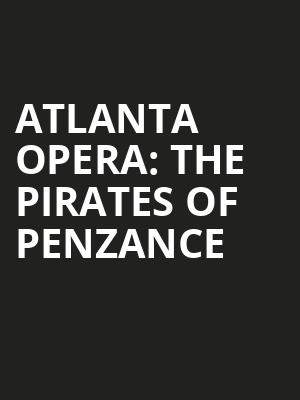 Atlanta Opera: The Pirates of Penzance

" I think that in time it will be very popular."

Why See Atlanta Opera: The Pirates of Penzance?

HIGH SPIRITS ON THE HIGH SEAS!

All aboard for Atlanta Opera's Gilbert and Sullivan's quintessential sea-fairing comic opera! Ever since its first turn on the London stage in 1880, The Pirates of Penzance has been a firm favorite with opera audiences, enamored with the tale of Frederic and his life with the colorful Pirates of Penzance and his quest for true love.

Including beloved tunes such as 'The Modern Major-General's Song' all conducted by Francesco Milioto, Pirates promises to be as witty and dazzling as ever, Frederic's tenure with the meddlesome pirates plays out in hilarious style!

Sound good to you? Share this page on social media and let your friends know about Atlanta Opera: The Pirates of Penzance at Cobb Energy Performing Arts Centre.