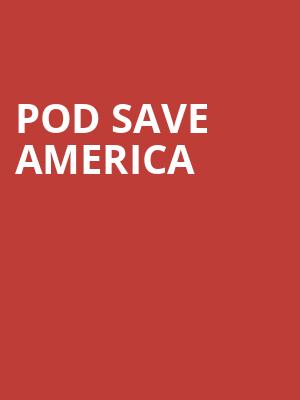 The political podcast goes on the road

Why See Pod Save America?

The State of the Nation

The country's pre-eminent left-leaning political podcast, Pod Save America began in early 2017, following the election of a certain someone... The hosts are all former members of the Obama administration - speechwriters Jon Favreau and Jon Lovett, and National Security Council spokesman Tommy Vietor - who pick apart the policy decisions and latest breaking news stories from the Trump administration week in, week out, with the help of guest journalists and political analysists.

The trio will be joined by special guests' but be quick as we are sure plenty of Democrats will fly in for seats! What could be more entertaining than hearing politicians curse as they talk about past times and present? It's going to be a night to remember!

Images are property of Crooked Media

Seen Pod Save America? Loved it? Hated it?

Sound good to you? Share this page on social media and let your friends know about Pod Save America at Cobb Energy Performing Arts Centre.