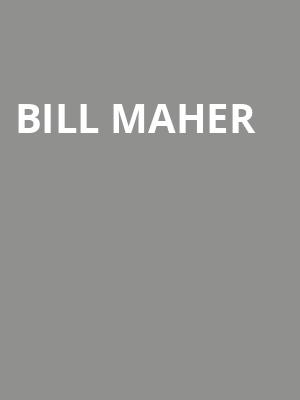 I'm the last of my guy friends to have never gotten married, and their wives - they don't want them playing with me. I'm like the escaped slave - I bring news of freedom.

TEMPORARILY POSTPONED: This performance has been suspended. We will update this page once we have more information.

Bill Maher has set the boundaries of political humor on what is just about allowed on American television, yet still manages to push the envelope on a frequent basis. His combination of unflinching honesty and blunt observations have earned him a staggering 23 Emmy nominations and a star on Hollywood's Walk of Fame.

Particularly known for his hugely critical views on religion, Maher's humor squares to the left of center, and has more often than not set his crosshairs on the right-wing political movement (particularly the Tea Party), and shows vociferous support for universal health care, same-sex marriage and environmentalism. However, since the events of 9/11, he has supported racial profiling at transport hubs and is a supporter of gun rights.

As well as his long-running television panel show Real Time With Bill Maher, he is still a keen participant on the political comedy circuit, often performing over 60 dates per year.

Mary: “Funny. Brilliant. Insightful. Nobody does it better!”

Bill Maher hit all the political highlights in his concert last night.... more

Sound good to you? Share this page on social media and let your friends know about Bill Maher at Fabulous Fox Theater.