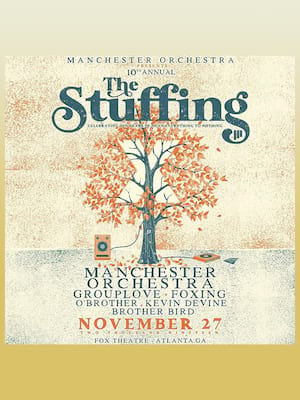 Manchester Orchestra play to their fans, they play well, and they always mix up their setlists so as not to disappoint.

Why See Manchester Orchestra - The Stuffing?

Atlanta natives Manchester Orchestra head on home once more for their 10th annual The Stuffing celebration, a yearly Thanksgiving concert that brings together friends and special guests of the band. This year, the outfit is pulling out all the stops, simultaneously celebrating the 10th anniversary of their breakthrough sophomore album Mean Everything To Nothing with the help of alt rockers Grouplove, post-rockers Foxing, fellow Atlantians O'Brother, singer songwriter Kevin Devine, power poppers Oso Oso and Manchester Orchestra's very own protege Caroline Swon AKA Brother Bird.

Built around the songwriting talents of frontman Andy Hull, Manchester Orchestra was formed when its band members were still at high school in Atlanta. It wasn't long before their math-rock tinged, post-hardcore indie goodness found its way onto records, released on the band's very own label Favorite Gentlemen. Released in 2009, Mean Everything To Nothing still stands as a landmark album for the band, filled with emotional intensity, beefed up riffs and an ambitious sound that's parlayed into a long and successful career.

Sound good to you? Share this page on social media and let your friends know about Manchester Orchestra - The Stuffing at Fabulous Fox Theater.