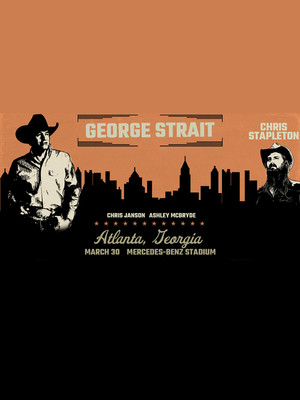 More bang for your buck!

Although living legend George Strait as hung up his touring hat for retirement, he likes to keep fans on their toes as he announces a one-off double bill performance in Atlanta in March. Teaming up with another Country star Chris Stapleton, Strait once again demonstrates why he really is the king of the Country.

Demonstrating their collective and impressive back catalogue country fans are in for a real treat when this pair team up to bring you a concert like no other.

With 33 platinum and multi-platinum albums to his name, George Strait is the top dog when it comes to the Country genre. With his name known world-wide, Strait is the best selling artist ever, just after Elvis Presley and the Beatles! With a top ten hit every year for the last 30 Strait has honed his craft into a fine artistry so don't miss this rare chance to see him take to the stage!

Shying away from gimmicks, Stapleton puts on one heck of a live show by keeping things simple and keeping the spotlight on the music. The outlaw performer often plays stripped back sets, often described as haunting, raw and spiritual. There are no fist pumps or party anthems here, just good old fashioned southern music that would make Johnny Cash proud.

Sound good to you? Share this page on social media and let your friends know about George Strait with Chris Stapleton at Mercedes-Benz Stadium.