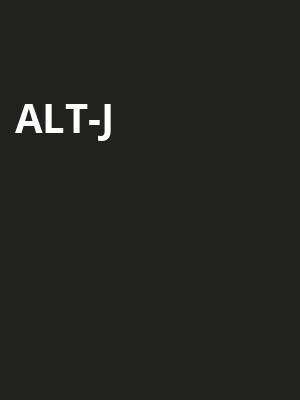 The first time most people took notice of Alt-J was when their video for single Something Good made a big splash online. A glittering, slow motion portrait of a bullfight was perfectly attuned to the band's trip-hop inflected indie rock. Since then, there was no stopping the quartet, who met at Leeds University in 2007. Their debut record An Awesome Wave won Britain's prestigious Mercury Music Prize in 2012, and spurred on by the success of singles like Breezeblocks and the Leon-inspired Matilda, went on to sell over a million copies worldwide.

Guitarist Gwil Sainsbury departed the group in 2014, but the three remaining members vowed to keep the band together. Their sound is an eclectic blend of influences from folk and indie rock to pop and trip-hop. Personally, though, we think the label 'folktronica' best describes this creative and imaginative band who continue to defy genre expectations. Catch these dynamic musicians live when they perform near you!

What an amazing show!! These guys are unbelievably talented. Best light... more

Sound good to you? Share this page on social media and let your friends know about Alt-J at State Farm Arena.